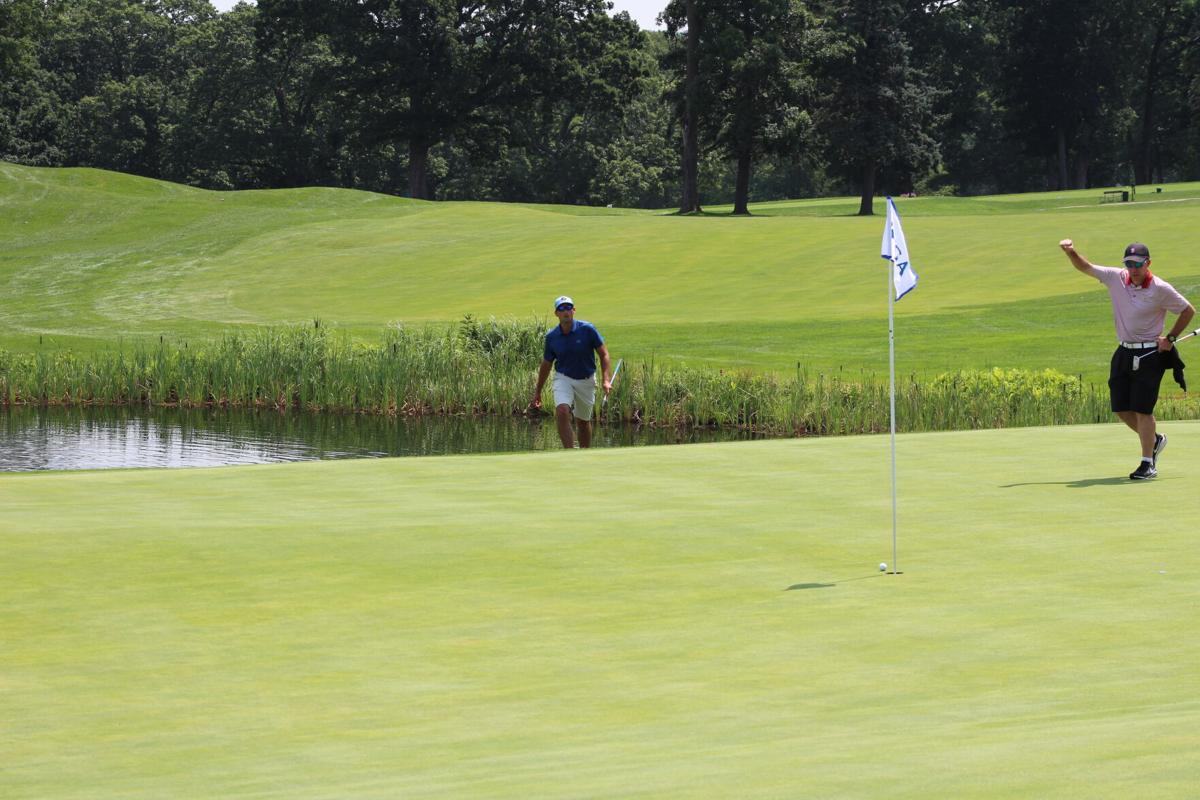 Needing to hole out from 40 feet in order to force a playoff in his RIGA Men's Amateur quarterfinal-round match, Lincoln High graduate Michael Hamilton (standing left in each photo) came through with a clutch chip shot at Kirkbrae Country Club last Saturday morning. Looking on with his hand raised is Bob Walsh, who was on the bag as Walsh's caddie. 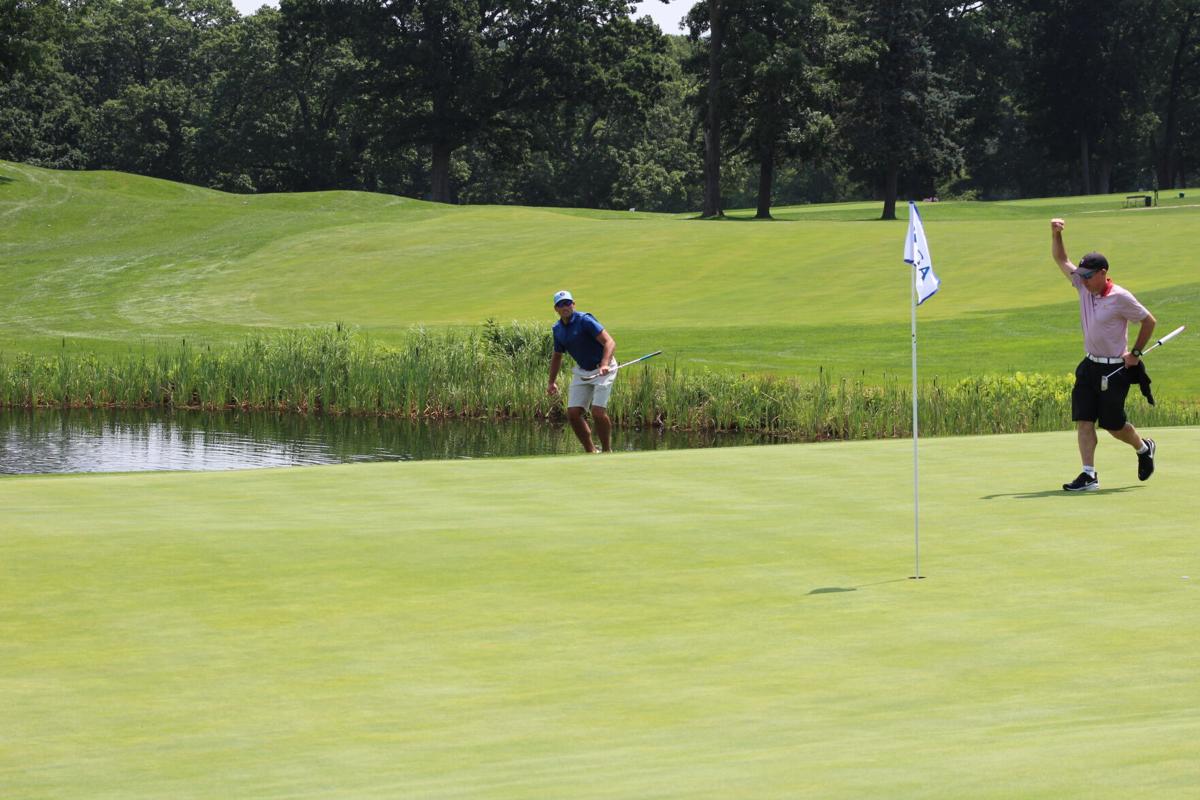 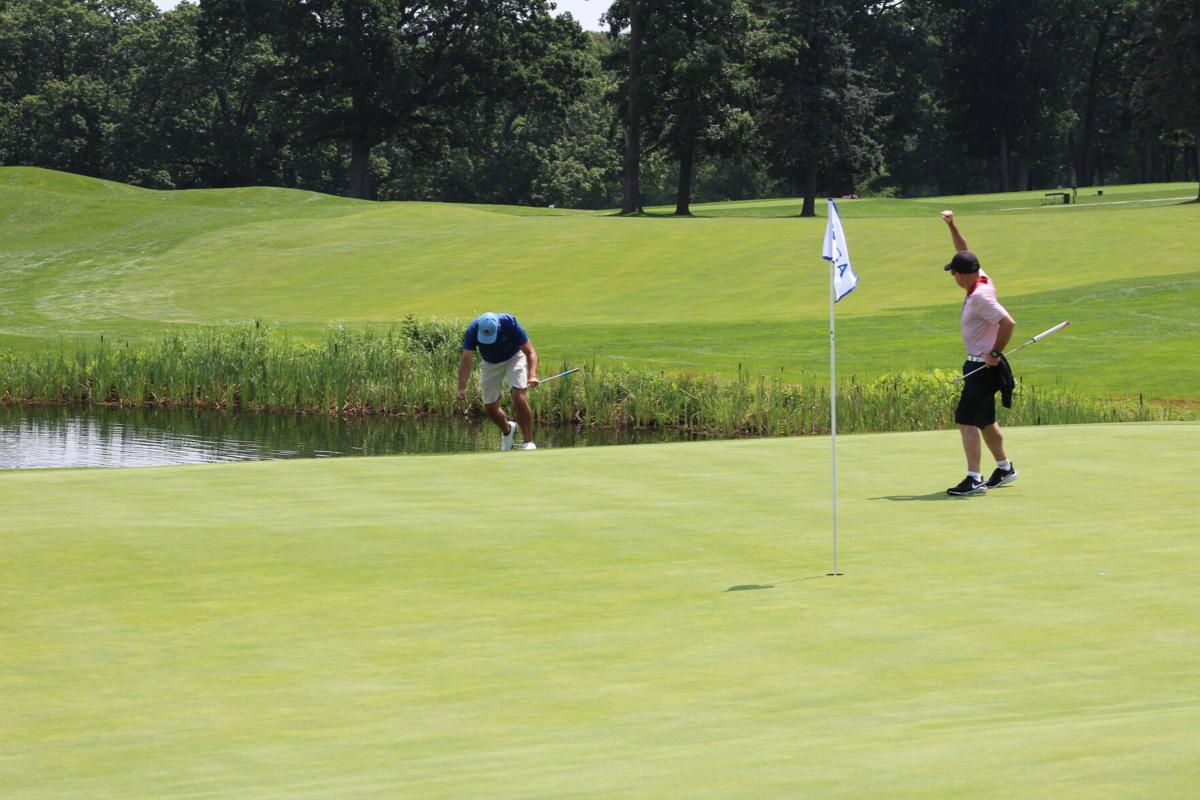 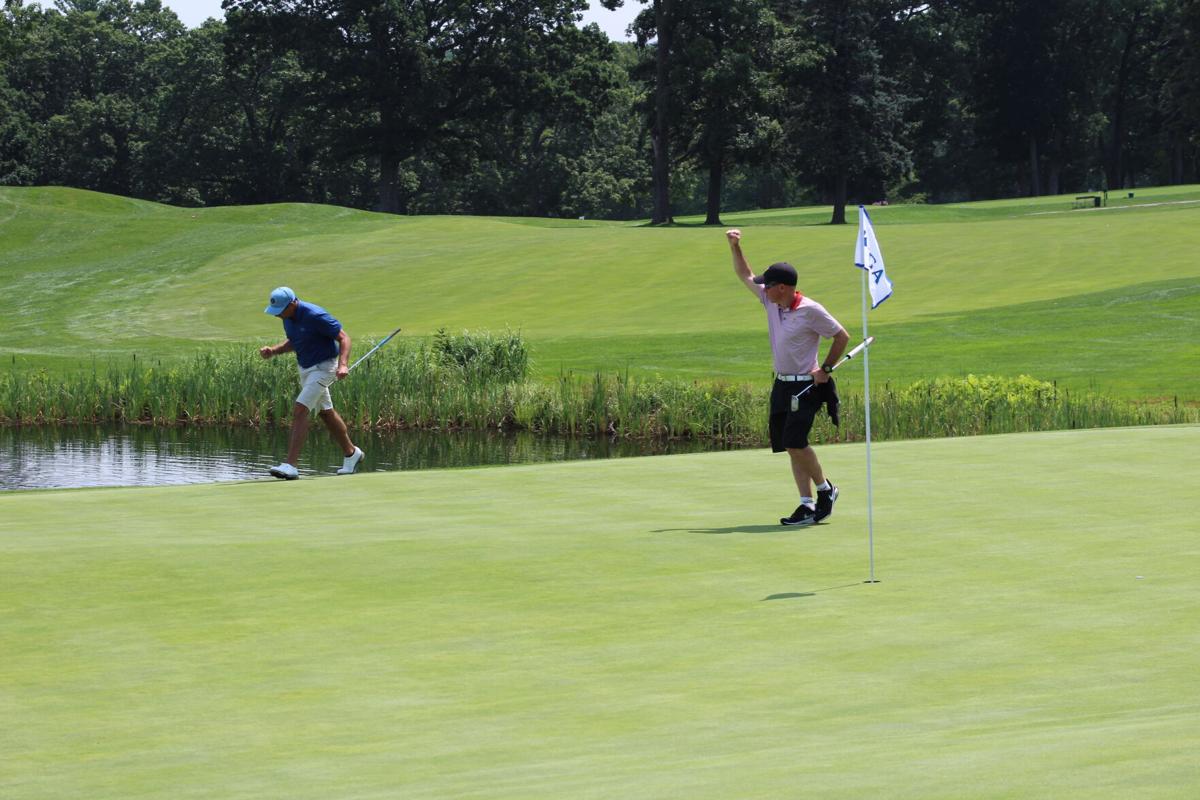 “One of the greatest shots under the circumstances you’ll ever see,” the social-media post read.

Simply put, you had to be there to witness the pressure-packed moment that unfolded last Saturday morning on the 18th green at Hamilton’s home course, Kirkbrae Country Club. His ball was positioned roughly 40 yards from the actual hole. His opponent in the quarterfinals of the RIGA Men’s Amateur, Andrew O’Leary of Pawtucket Country Club, didn’t exactly have a gimmie putt, yet the percentages were heavily slanted towards O’Leary winning one-up.

Simply put, Hamilton needed to slam dunk his chip bid. With a veteran basketball coach by his side as his caddie, a little hoops-related terminology seemed appropriate. The 2006 graduate of Lincoln High School needed to go for broke. Otherwise, the chance to catch O’Leary in extra holes wouldn’t come to fruition.

Spoiler alert: Hamilton was the essence of pure and precise. High drama gave way to an exuberant scene when his 40-foot chip kept on rolling before disappearing into the cup for a match-extending birdie. O’Leary prevailed in 21 holes, though the victory felt like receiving the Oscar for Best Supporting Actor.

Welcome to what has been unofficially dubbed “The Chip Heard Round Kirkbrae” where we relive the sequence through those who witnessed it in real-time. Naturally, there’s reaction from Hamilton (the golfer) along with his caddie (Bob Walsh) and the photographer (Dalton Balthaser) who captured lightning in a bottle through his lens.

Rewinding things a bit, Hamilton popped up his tee shot on the par-four, 456-yard No. 18, a misfire that landed in the fairway and left with an approach shot from 220 yards away. Most of time, he’s in the 150-160 range.

His second shot kicked down near where Kirkbrae’s main source of water is located and left Hamilton with what he dubbed, “an awkward chip.”

Hamilton was well aware about the odds and how they weren’t on his side. He was also in a bit of an unfamiliar spot. If he misses the 18th green, it’s typically to the left. On this occasion, the ball landed right.

“I probably make that 1 out of 1,000 times,” he said. “Usually, the right side doesn’t come into play, but ironically enough during last year’s club championship, a guy hit the same exact chip shot to take the quarterfinal match to extra holes. The pin was in the same exact spot.

“It’s kind of eerie how it happened that way,” Hamilton added.

Hamilton could see the very top of the flag, though that wasn’t the primary target. Per his caddie, it was suggested that he position the shot based off a red tree located in the background.

“Instead of aiming at the pin, aim there, let it roll, and see where it goes,” said Hamilton. “O’Leary had four or five feet left for par, but he had been making everything. At the very least, the idea was to make sure I was inside his ball to put some pressure on him.

“Obviously, I didn’t think it would go in.”

The pitch was made with a 58-degree wedge.

“As soon as I hit it, I knew it was going to be good so I started running up the hill,” said Hamilton. “I got to the top of the hill just as it was about to go in.”

Then came the firestorm of jubilation.

“I blacked out and went nuts … fist pumping and yelling,” said Hamilton. “There were so many people around the green. I had never heard anything so loud in my life. A couple [Kirkbrae members] began screaming my name. I just started walking towards the first tee. I was in shock.

“The adrenaline takes over and you just kind of move on.”

Walsh was standing on the 18th green. He was holding Hamilton’s putter.

“I wanted to have a better read just in case it rolled past the cup and he had to make a putt coming back,” said Walsh. “No one thought O’Leary was going to miss his putt for par, but Mike knew what he was trying to do.”

Walsh’s spider sense was tingling the moment the ball landed on the putting surface.

“It looked like it was going dead center,” he said. “It landed in the spot we had talked about.”

A member of the men’s basketball coaching staff at Providence College, Walsh typically refrains from wearing his emotions on his sleeve during the heat of the moment. It doesn’t matter if the team is up 20 or down by the same amount.

On Saturday, Walsh broke character. He veered away from his stoic sideline demeanor. As Hamilton’s ball kept rotating towards the hole, Walsh raised his right arm – a sign that perhaps victory was on the horizon.

“It was rolling with good pace. From 10 feet out, I thought it had a chance to go in,” said Walsh. “Without question, it’s the best golf shot I’ve witnessed up-close. It was something special.

“We never said, ‘Okay, this has to go in.’ He said he would have to put something on his shot. He picked the line, asked what I thought, and I said I liked it,” Walsh added. “The last thing I said to him is that if he hits it in the right spot, it may go in. He hit in the right spot and it went in.”

The RIGA’s Manager of Communications & Technology, Balthaser was positioned behind the 18th green. There was a part of him was gearing up to take a picture of the post-round handshake between Hamilton and O’Leary. Balthaser was also keeping the light on for a turn of events that would defy logic.

“You’re always looking for crazy stuff in those kinds of events. The odds may have not been the best for [Hamilton], but you always want to have some sort of camera or video at the ready,” said Balthaser. “The good thing about photography is that you can take 10,000 photos and 9,999 of them can be bad. If you have one good one, that’s all that really matters. You’ve just got to be in a good position to capture it.”

Snapping away, Balthaser came away with a photo essay that captured the emotions displayed by the player and his trusty caddie. The four photos that were posted on the RIGA’s Twitter page told a story that doubled as the only detailed evidence of Hamilton’s got-to-have-it sequence.

“He had to make it. There was no other choice. For him to hit it basically perfectly, it was awesome,” said Balthaser. “To capture the ball somewhat near the hole and getting Bob Walsh with his fist in the air before the ball goes in along the emotion from Mike, it’s pretty cool.

“I had to share it [on social media] because it’s something you don’t see often,” added Balthaser. “One photo may tell what happened, but four photos does a much better job.”