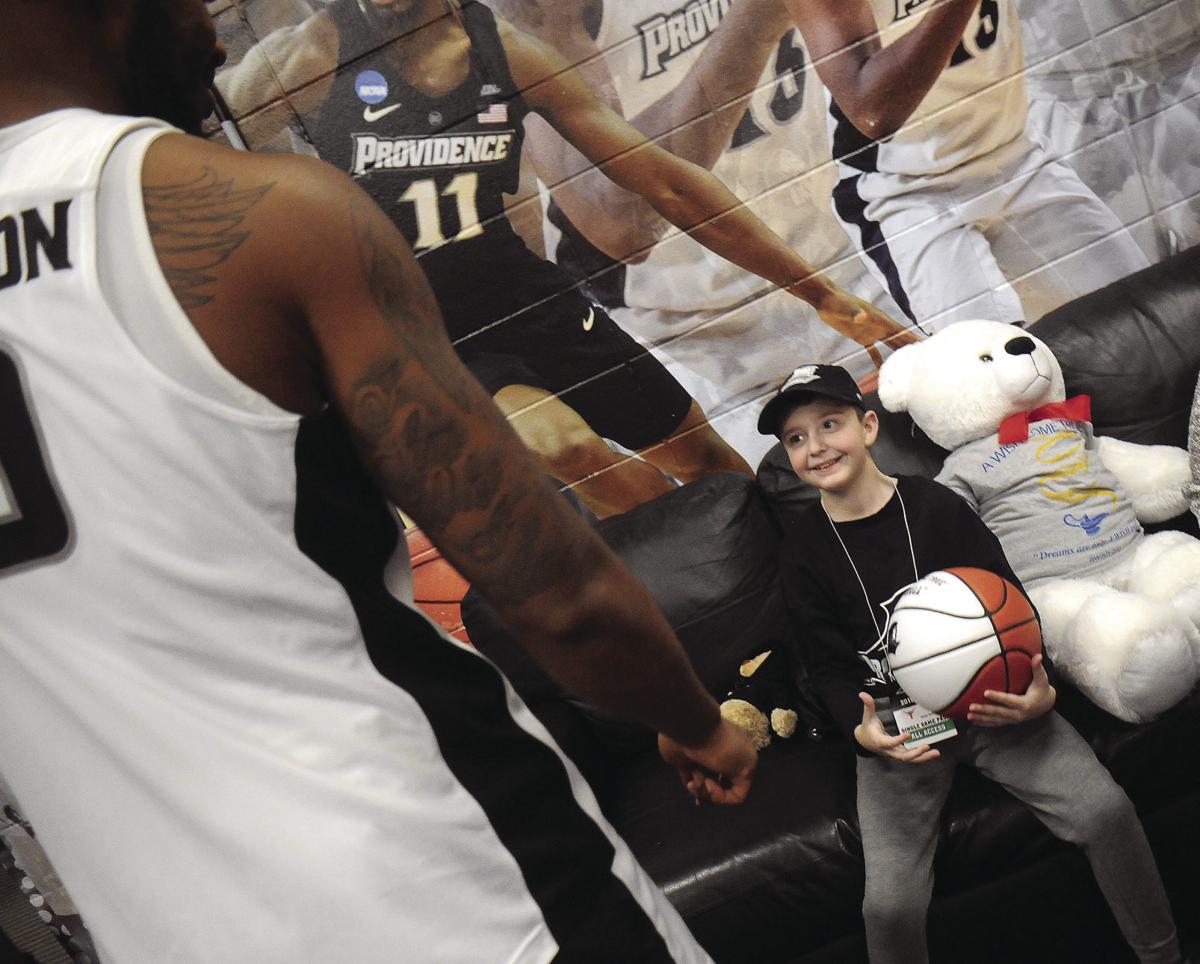 Kayden Watson, 8, of Warwick, enjoys a locker room celebration with members of the Providence College men’s basketball team after PC’s 70-48 win over Texas on Dec 21. A guest of the Friars in conjunction with A Wish Come True, a non-profit organization that seeks to make children who are dealing with serious illnesses and their families to momentarily forget about their troubles, Kayden was treated like a VIP after the Texas game. He was presented gifts, which included an autographed basketball. Family members were also on hand, included his mother Jennifer, father Dan, as well as his uncle Alex MacLennan and his grandfather, Dan Watson. Besides getting to meet PC head coach Ed Cooley, Watson also spent time in the company of Friar players Nate Watson, David Duke, and Emmitt Holt. 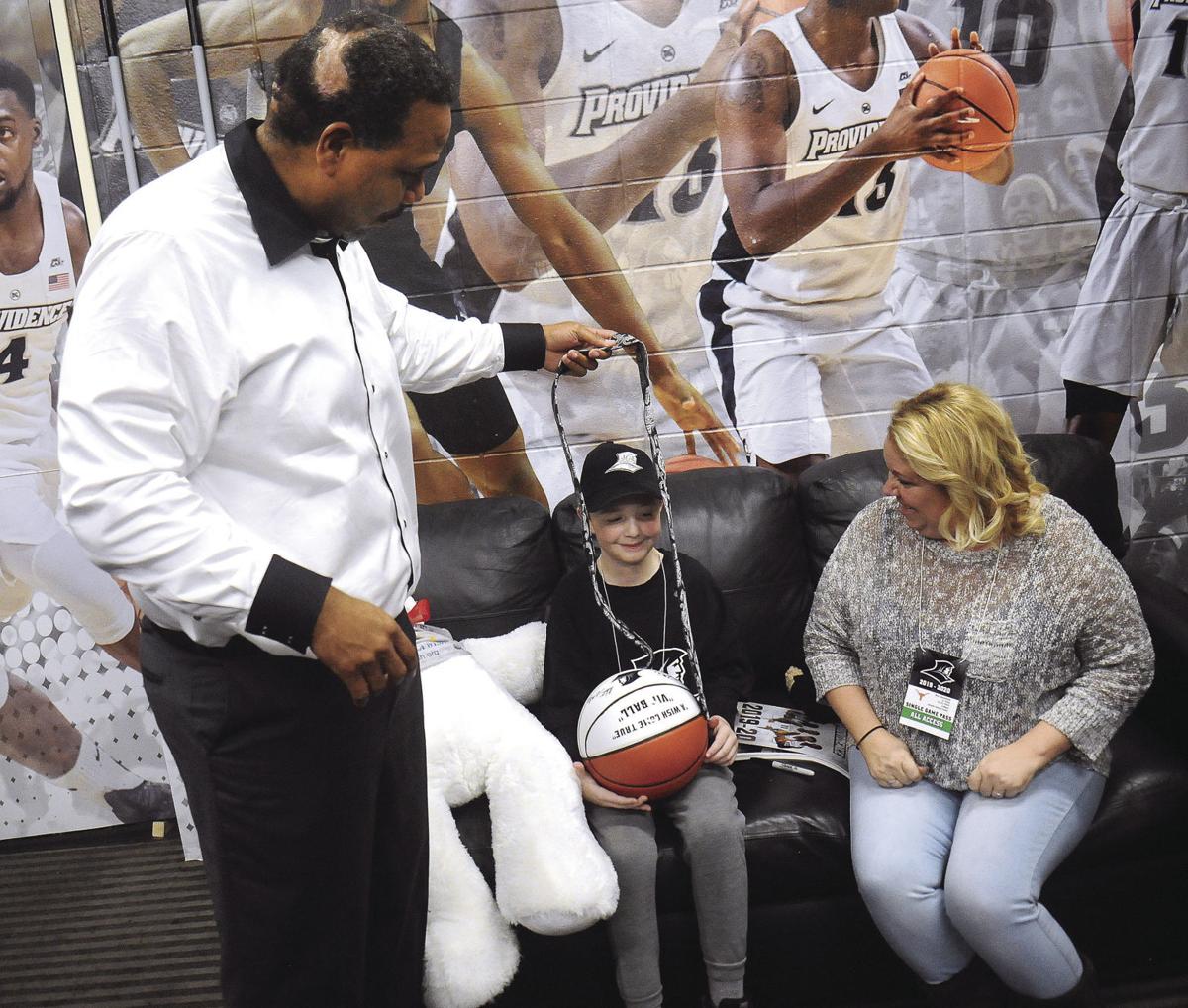 With his mother Jennifer sitting next to him, Kayden Watson looks as PC head coach Ed Cooley presents him with the tie he wore during the Texas game. 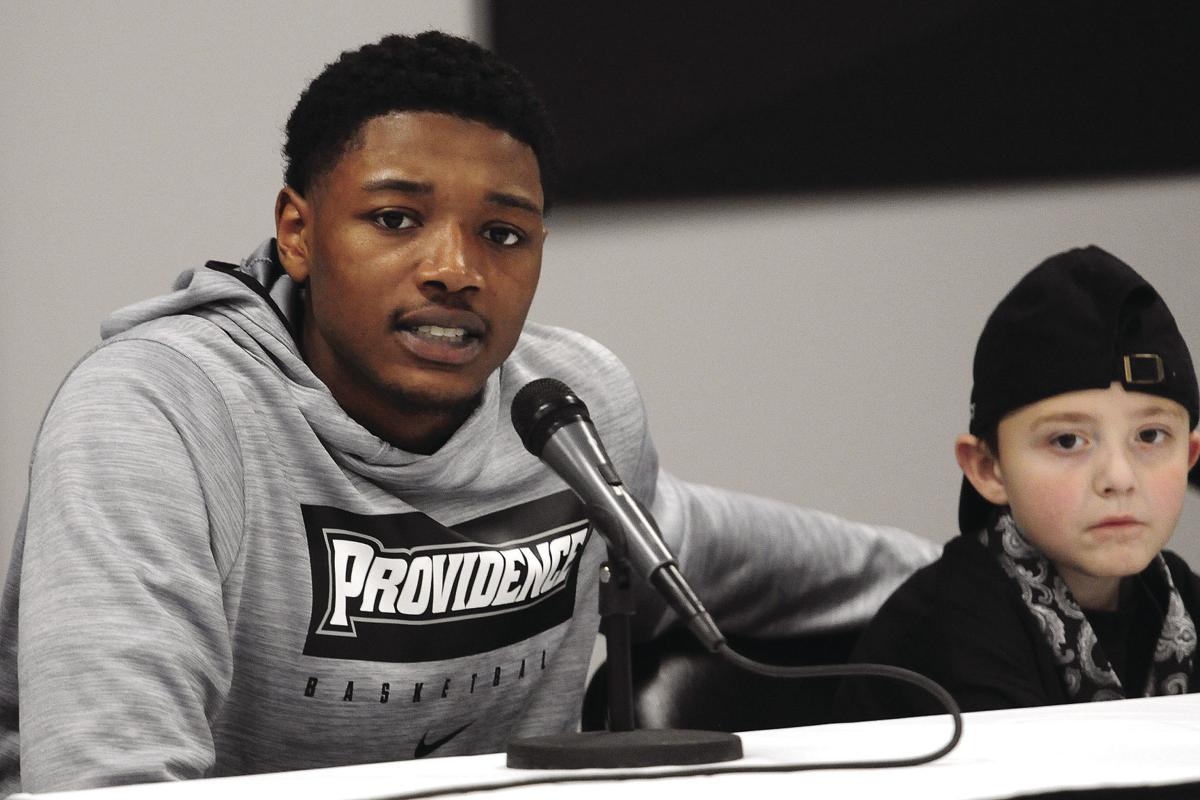 Kayden Watson sits on the podium next to PC forward Emmitt Holt following the Friars’ Dec. 21 win over Texas at the Dunkin’ Donuts Center. Kayden was a guest of the Friars on behalf of A Dream Come True.  Besides getting to meet the players and head coach Ed Cooley, Watson was asked to sit on the same stage inside The Dunk where PC conducts the postgame press conference.

PROVIDENCE — It’s the morning after the December 6 loss at URI. The 75-61 loss by the Providence basketball Friars is still raw, yet we find sophomore guard David Duke inside the Friar Ruane Development Center.

It’s not exactly surprising to see a player standing in the practice facility with memories of a tough defeat still fresh. For now, the jump shots can wait. So can the books – even with final exams set to commence.

On this particular occasion, Duke seeks to brighten the lives of youngsters and family members who are dealing with far more dire circumstances than the outcome of a game.

The Calabria Lobby of Champions is transformed into a warm and festive scene that’s full of Christmas spirit. A total of 20 families and 45 kids are guests of Providence College in conjunction with A Wish Come True, a non-profit organization located in Warwick whose mission is to make a positive impact on children ages 3-18 who are suffering from life-threating illnesses.

The partnership between PC and A Wish Come True stretches back nearly a full decade and has proven to be a slam dunk on many levels. It started out as an ambitious undertaking by Tom Stone, a former Providence floor seat donor. For several years, Stone served as the main facilitator in making sure the Friar-themed A Wish Come True experience hit all the prerequisite high notes.

In recent years, PC has worked exclusively with A Wish Come True, which gives the school plenty of advance notice as far as who the attendees will be for every home game at the Dunkin’ Donuts Center. It’s a multi-layered process that has served as a source of immense pride for Steve Napolillo, PC’s senior associate athletic director.

As a youngster, Napolillo watched folks from A Wish Come True grant a wish – a trip to Disney World – to a first cousin who was battling a serious illness. When he worked with the Pawtucket Red Sox, Napolillo orchestrated his fair-share of A Wish Come True outings where youngsters and accompanying family members had the ability to walk into the clubhouse and find themselves in the company of pro baseball players.

The purest example of what makes this special connection so powerful and life-fulfilling can be found after every Providence home game. Walk inside the Friar locker room and you’ll see spontaneous interaction where smiles are aplenty and memories are forged.

Maybe if you’re lucky, you’ll get to witness coach Ed Cooley take off his tie and hand it over to the youngster who for a refreshing change of pace isn’t thinking about cancer treatments and doctor’s appointments.

“You can’t put a price tag on it,” said Napolillo, who knows nothing would be possible without the support extended by PC athletic administrators as well as the basketball program. “The great thing about working in sports is that is gives you a chance to impact people in need. After a win, you’re captivated. After a loss, you think the world is coming to an end. Something like this grounds you.”

Napolillo’s greatest joy comes from the looks on the family’s faces as they spend some time in the company of the Friars. The face-to-face time ranks as one of the supreme highlights from an outing that includes floor seats, passes to the Champions Club Room, a Friar-themed gift pack that includes an autographed team basketball that’s presented to the A Wish Come True honoree, plus the opportunity to attend Cooley’s postgame press conference.

Without fail, Napolillo hears the same refrain over and over. Rest assured it never gets old.

“Families will say that you gave us an opportunity to forget what we have to deal with,” said Napolillo, noting that his phone features plenty of pictures that double as documentation of Providence’s relationship with A Wish Come True.

As Executive Director/Wish Granter for A Wish Come True, Mary-Kate O’Leary can vividly attest as to why the partnership with PC basketball has enjoyed such profound success. A Worcester native who played college basketball at UMass-Lowell, O’Leary is helping to champion a cause that she wishes was around when she watched her younger brother succumb from a rare form of leukemia.

What the then-11-year-old O’Leary remembers is seeing her parents drive to a Boston hospital on many nights to see her brother, who was four years younger. As much as it’s about brightening a youngster’s day, A Wish Come True is just as cognizant when it comes to realizing that parents and siblings are also right there in the throes of intense dealings.

The times she’s been in the PC locker room, O’Leary has made sure to notice the uplifting nature of family members who are trying their best to keep a positive outlook in the face of trying circumstances.

“To be treated like royalty, which is what the Friars do for us, it brings smiles to their faces,” said O’Leary. “It’s an opportunity that hopefully gives them a break.”

After every game, Napolillo will put feelers out and ask the beneficiary of the latest A Wish Come True excursion about the Friar player they would most like to meet. The most requests are for Duke, the Providence native who clearly understands the role he’s asked to fulfill once the final horn sounds.

“It puts everything in perspective. At the end of day, we’re just playing a game. They’re going through real-life struggles,” said Duke. “To give them some entertainment and the opportunity to meet us … they look at us like superheroes. That’s a great feeling to have as a player.”

Echoing Duke’s sentiment, PC forward Emmitt Holt said, “Just seeing them smile and knowing I helped make their day, that’s enough for me. I have nothing but respect for them.”

It’s customary for Cooley to begin each postgame media session with an acknowledgment of the A Wish Come True program. Sometimes, the guest of honor is invited to join the head coach and players at the podium.

It’s about playing a small yet pivotal role in supporting kids and their families who are going through a rough patch. For a few hours, you forget about the hurt and suffering. For PC and A Wish Come True, it’s not solely about living in the present. It’s about leaving an impression where uplifting feelings are clung to tightly upon exiting The Dunk.

“Hopefully when they go home after a Friar basketball game, they feel so special that it helps them with their fight regardless of the challenge they face,” said Napolillo.