Fans beginning this Friday will have the option to head to McCoy Stadium to pick up their favorite ballpark good items. 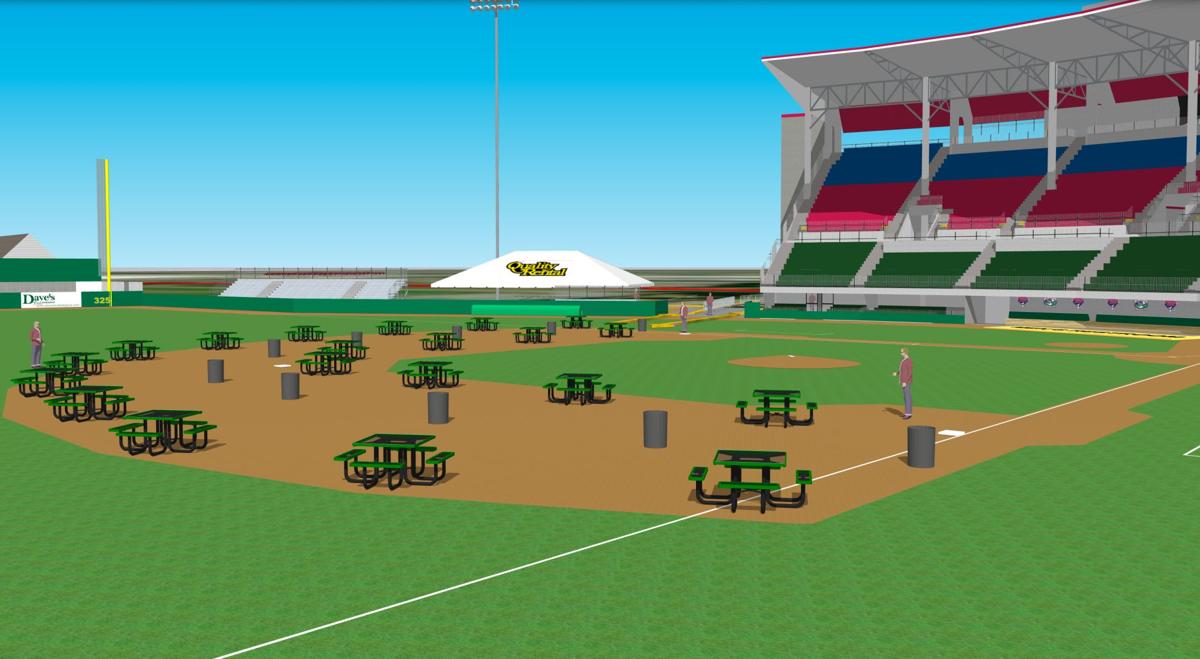 A visual look at what ballpark dining at McCoy Stadium will look like.

PAWTUCKET – What do you get when you cross a ballpark that’s rapidly heading down the home stretch of a 50-year relationship with a minor-league baseball team and the franchise’s desire to be part of the reopening of the local economy?

Would you believe Bistro McCoy?

Starting Friday, the Pawtucket Red Sox will open McCoy Stadium for curbside pickup for traditional concession stand favorites. The following weekend (June 5 & 6) will feature the introduction of “Dining on the Diamond” where fans will be allowed to eat on the same McCoy playing surface the PawSox players would normally be occupying at this time of year.

This Friday’s first-of-its-kind curbside pickup will run from 5-8 p.m. with fans receiving their dinners and driving off without having to open their car doors.

The curbside offerings will resume the following weekend, Friday and Saturday evening, June 5 and 6, from 5 p.m. until 8 p.m., along with the premiere of “Dining on the Diamond,” which will have seatings at 5:30 p.m. and 7 p.m.  Additional dates will be announced.

Per a release that was distributed Wednesday, all ordering must take place in advance, payable via credit card, at pawsox.com, starting Thursday, May 28 at 10 a.m.

In accordance with state guidelines, reservations are required for Dining on the Diamond, seating is limited to five people per table, and the number of tables is limited to 20 per seating (thus 40 total reservation slots per evening).  To accommodate as many fans as possible, fans can dine for one hour.  Fans can also call (401) 724-7300, 10 a.m. to 8 p.m., Monday-Friday, to receive personal service from the PawSox staff.

For “Dining on the Diamond,” the 20 tables are aligned along the infield dirt, with at least 14 feet between them.  Each will be cleaned and disinfected before the first seating and again before the second seating.  Any trash will be disposed of between seatings.  In case of inclement weather, dining will switch to McCoy’s open-air main concourse where picnic tables will be available for patrons to enjoy their meals.

The ballclub is working closely with the City of Pawtucket and the Rhode Island Department of Health to ensure compliance with procedures regarding the novel coronavirus. Fans will have to wear masks except when eating, and will be asked to answer self-screening questions prior to admission. Visit www.pawsox.com for the current list of questions.

In addition to traditional baseball delicacies, fans can enjoy dinner specials, including vegetarian and gluten free options. The full menu, which contains items ranging from only $3 to a maximum of $10, includes this “All-Star Starting Lineup:”

8. A Barbeque Meal that features Pork and Brisket with Mac ‘n’ Cheese, Cole Slaw, and Corn Bread (not so ideal for vegetarians)

9. Bacon-Wrapped Hot Dogs with Pulled Pork and Mac ‘n’ Cheese (not even close to vegetarian)

Fans can enter the McCoy Stadium parking lot either off Division Street or Columbus Avenue, and follow the marked route. Fans opting for curbside pickup will receive their dinners right in their cars from PawSox staff and will exit via the Service Entrance onto Division Street.

Fans enjoying “Dining on the Diamond” can park free in designated spaces.  They will also be able to use restrooms in the PawSox’ and Visitors’ Clubhouse.  These areas, together with the PawSox Offices, all underwent a professional deep cleaning this past week.

The dining at McCoy experience will be accompanied by music and photographs on the videoboard to commemorate the 50th anniversary of the PawSox.

The PawSox are one of several minor league baseball franchises across the country to use food as a means to attract fans to the ballpark.

UPDATE: The PawSox on Thursday announced that both nights of “Dining on the Diamond” on June 5 and 6 sold out in only 88 minutes. Twenty tables with up to five patrons constitute each seating, per current Rhode Island guidelines for outdoor dining. Curbside Pick Up, the other part of Ballpark Dining, is still available for its debut on Friday, May 29, and for June 5 and 6.

Additional dates and times for “Dining on the Diamond” will be added.  Full details are at pawsox.com.